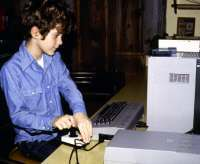 My first computer was a Commodore 64. My family got it when I was eight years old (see picture at right), and was probably the single most important event to shape my eventual career.

At the time, the Commodore 64 was the best computer of its class. You could use a TV set as a monitor, it had tape drives and disk drives, 64k of RAM, you could use a 2400 baud modem with it, it could display 16 colors, had superb sound from a 3-channel SID chip, a cartridge and expansion port, joysticks, BASIC was integrated into the operating system, and it cost less than $200 (at least when we got it).

Sometimes I’ll get nostalgic about my old C64. When I was a kid aspiring to be a programmer, I dreamed of being able to develop my own games. Immediately after the computer was set up, my head was buried in the technical manuals and programming guide that came with it. Sadly, long past are the days when a single programmer can develop a modern breakthrough computer game. Back then, one person could program Pac Man or Centipede or some similar action game and create a hit virtually overnight. Will Wright originally wrote Sim City on the Commodore 64, which later went on to be one of the most popular computer games ever designed. And before writing Sim City, Wright first wrote Raid Over Bungling Bay, a game I spent countless hours playing as a kid.

Thanks to emulation, it is easy to experience the old Commodore 64 on almost any modern computer. If you’re looking to download C64 games, just do a Google search. The emulator I find to work best is VICE, and it is available for Windows, Mac, MS-DOS, and more. C64 emulators are even available for Pocket PCs. If you are like many others who have emailed me, and are looking for a real Commodore 64, just try Ebay.

At the bottom of this page is a short review I wrote of The Home Computer Wars by Michael S. Tomczyk, an insider’s detail of Commodore from 1980 to 1984, and the creation of the VIC-20 (the predecessor to the C64).

I’m moving my 8-bit and Commodore stuff to a new web site.

My C64 is customized a bit… 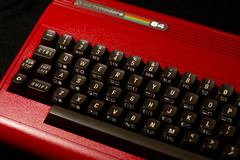 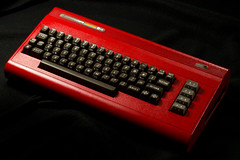 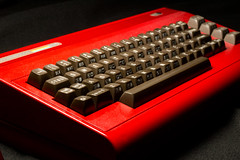 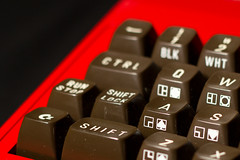 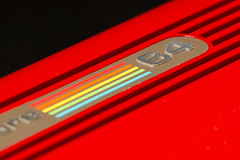 And another modification project:

Below are some screen shots of old C64 games I used to play. These were taken by running the games in an emulator.

Into the Eagle’s Nest

I’m moving my 8-bit and Commodore stuff to a new web site.

On The Edge
The Spectacular Rise and Fall of Commodore

This is as thorough a history of Commodore as you’ll likely ever see or want. It’s a fascinating read covering the beginnings of Commodore as a computer company, each major product it released, the termoil, lawsuits, etc., and its ultimate downfall.

This book supplants Tomczyk’s book (reviewed below a year before On The Edge was published) as the de-facto History of Commodore.

If you are 1., a computer industry history enthusiast, and 2., ever owned a Commodore computer such as the PET, VIC-20, or Commodore 64, then you should try to find a copy of The Home Computer Wars by Michael S. Tomczyk. Most computer history books I have read seem to only mention Commodore as a footnote, never seeming to give it its proper dues or recognizing how it impacted the industry. As far as I know, this book is the most detailed available when it comes to Commodore’s role in the history of computing.

The Home Computer Wars is subtitled “An Insider’s Account of Commodore and Jack Tramiel.” And that it is. This book is short on technical detail but heavy on the inside information on what went on in Commodore from 1980 to 1984. From the perspective of a fanatical Commodore user from the 80s (like yours truly), the most interesting aspect of this book is Tomczyk’s chronicle of the creation and marketing of the VIC-20. The VIC-20 was the predecessor to the C64, and it could be argued (as Tomczyk does) that the VIC-20 was the first real home computer “for the masses.”

This book is as much about Jack Tramiel as it is about computers. Tramiel was Commodore, and his method of management and goals for the company were called “the Commodore Religion,” and the insiders of Commodore who believed in his vision were called “Commodorians” by Tomczyk. Tramiel was a holocaust survivor that rebuilt a small calculator company into the first computer company to have over a billion dollars of revenue in a year.

It’s quite educational to read a home computer “history” book that was written long before the world decided on the “PC clones” that most of us use now. 1984 was still an era where the computer industry was barely beginning to emerge from a technological dark age of competing and incompatible platforms. In keeping with the theme of the title, Tomczyk writes as if he were a soldier in the trenches of a protracted land war. It’s a great read if you have the interest in the subject matter. Get a copy if you can. As of this writing, the author of the book is selling original first editions from his personal stock on Amazon (click here) . 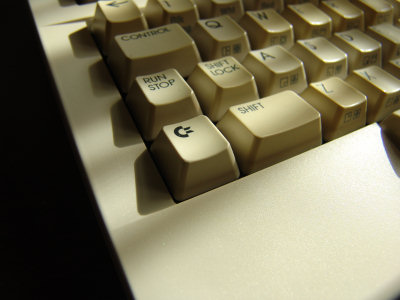