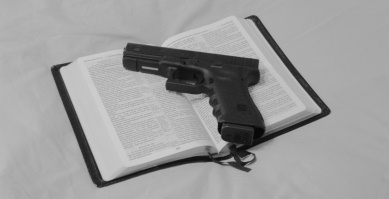 We’ve all heard the cries of hypocrisy: You can’t be Christian and against gun control; you can’t be pro-life and pro-gun ownership; vengeance is God’s, so why do you need a gun?, etc.

Let us examine, in particular, the charge that being prepared for self-defense is vengeance.

Gun Owner: “People kill people. Gun control laws do nothing to stop criminals from committing crimes and just make it harder for law abiding citizens to protect themselves. Saying we need more gun control laws to keep people from being murdered is like saying we need to ban silverware so people won’t get fat.”

Gun Grabber (knowing he has no logical argument): “You hypocrite. You’re a Christian, and the Bible says Vengeance is God’s, so what right do you have to own a gun?”

We already know that gun laws don’t prevent gun crime. It was illegal for a student to carry a weapon on the Virginia Tech campus, and so the only student with a gun was the one shooting everyone in sight. Short of snapping magical fingers and disappearing all firearms, no law imaginable can prevent guns from being used by criminals. But we know all this already, and it’s all been completely documented.

We also know that as a matter of United States law, the right to own guns is recognized by the Constitution. All the hemming and hawing one can conjure up doesn’t change the fact that the very foundational document of our government says “A well regulated militia being necessary to the security of a free State, the right of the People to keep and bear arms shall not be infringed.” Some people try to argue that militia means government military, but it doesn’t, and the very wording of the amendment places the right of arms ownership with the people and not the state.

But now, what of the Christian?  Can a Christian accept these facts and own guns without hypocrisy?

“Dearly beloved, avenge not yourselves, but rather give place unto wrath: for it is written, Vengeance is mine; I will repay, saith the Lord.” -Romans 12:19

There can be no doubt that the Bible clearly directs the Christian not to take vengeance into his own hands. Vengeance is taken out by God himself, and according to 1st Peter 2:14, he does this through the institution of government. But is self-defense vengeance?

For an answer to this, we do not go to the gun-grabbing liberal who despises individual liberty and sees personal defense as an affront to the nanny-state. To see if the divine operation of vengeance is equated with self-defense, we need merely read more Scripture.

For example, if someone breaks into your home and you kill him while he is committing his crime, is that vengeance?

“If a thief be found breaking up, and be smitten that he die, there shall no blood be shed for him.” -Exodus 22:2

Clearly, the answer is no: self-defense is not vengeance. But what if you wait a while, and go kill him after you found out what he did? Conveniently for us, the very next verse answers that:

“If the sun be risen upon him, there shall be blood shed for him; for he should make full restitution; if he have nothing, then he shall be sold for his theft.” -Exodus 22:3

These two verses lay out quite clearly the difference between self-defense and vengeance. In the first case, the thief was killed while committing his crime, and there is no fault in the man who killed him. But if he waits until it is over (the sun be risen), it would be vengeance, because at that point the imminency is passed and the thief must be dealt with under the law.

So we see quite plainly that acting in self-defense is not taking vengeance.

“Then said he unto them, But now, he that hath a purse, let him take it, and likewise his scrip: and he that hath no sword, let him sell his garment, and buy one.” -Luke 22:36

65 thoughts on “Christians, the Bible, and Guns: is Self-Defense Vengeance?”